The Great Ash Wednesday Storm of 1962


Never heard of it? I'm not surprised. These days the media make a huge fuss over extreme weather events, and some claim they are proof of Climate Change or Global Warming. I beg to differ.

In 1962 my family moved from Cornwall to London. It was in July. We'd no sooner got settled in our new home when we experienced the wettest August Bank Holiday since records began. Our house looked out (to the rear) at the huge Kensal Green gasometer and we could see the rain flowing off the structure in rivers. The drains could not cope. A few months later, following the Guy Fawkes night where everyone in London had a bonfire, we had the worst smog ever. I used to walk to school and for the three weeks that it lasted you could not see the other side of the road. All noise was muffled and buses drove carefully along with headlights on full- even at midday, the drivers straining to see the bus stops. For Parliament it was the last straw. Within a few months they'd passed the Clean Air Act, which prohibited coal fires and bonfires in London, and they never had another smog like it. The air was foul. You could taste it. If you breathed through a handkerchief it soon became filthy with soot and smuts. Eventually the rain fell and cleared it away.
We had a couple of weeks of "normal" weather before it snowed on Boxing Day. I know we all sing about "White Christmases" but it was no joke. The snow didn't clear. It froze hard and stayed frozen for about three months.
We had no central heating. Very few people did. I was thirteen and my daily chore was to take our old pram to a coal merchants off Southern Row, about 500 yards away. The coalman would fill my sack with 56lb of coal and I'd wheel it home, stopping to collect a gallon of paraffin for the heater in the kitchen. That was the extent of our heating. A coal fire in the living room (which I'd clean and light every morning), and an old paraffin heater in the kitchen.
We survived.

But back to March 1962. I'd forgotten when this occurred until I read an account in Wattsupwiththat a couple of days ago.
http://wattsupwiththat.com/2012/03/06/50-years-ago-the-great-atlantic-storm-of-1962/

The author describes the damage caused to the eastern seaboard of the US, but the same storm wreaked havoc in Cornwall, most notably in Penzance.
I used to travel by train from Hayle to my school in Penzance. We knew there's been a storm in the night, but when the train was terminated at Marazion and we had to get on buses to continue, we realised that it had been serious.
I sat upstairs in the bus and we saw that Mounts Bay was full of ships sheltering from the storm. The storm had hit land at Penzance, which was unusual in itself as it's sheltered from the prevailing winds. As we neared Penzance station we could see that the sea had washed away some of the trackbed and the harbour was severely damaged. Huge blocks of granite had been lifted and tossed aside. I could only guess at the power of the sea that could do that.

The WUWT article caused me to look up to see if there was anything on the net about the storms. I found two sites
http://picturepenzance.co.uk/photos/showimage.php?i=14759&c=373
And here
http://freepages.family.rootsweb.ancestry.com/~treevecwll/pzseaashwed.htm

Here's one of the photos. If you know Penzance Promenade you will be amazed at the damage caused. 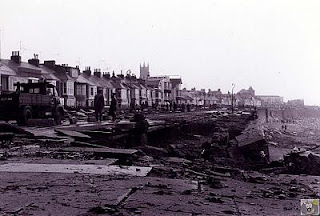 And here's a picture I took of a storm hitting Penzance in 2006. Just not in the same league. 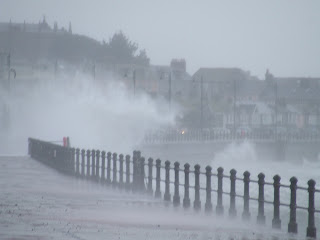 That 1962 storm must have been one of the biggest to hit these shores
Posted by Dave at 4:58 pm

There's a very dramatic UPI photo of the storm rolling ashore in Kitty Hawk, NC, http://bit.ly/1aD3Bsp, that would frighten any mortal! i agree that AGW is overblown nonesense.